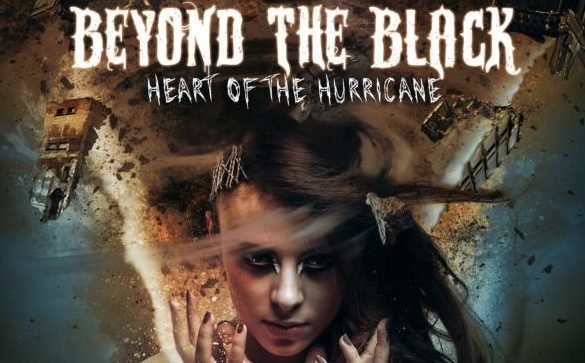 August 3, 2018 — Just one month remains until BEYOND THE BLACK will release their brand-new album Heart Of The Hurricane – out on August 31 via Napalm Records (GSA via Airforce1).

BEYOND THE BLACK celebrate a true story of success! Their debut album Songs Of Love And Death (2015) immediately scored #12 on the German album charts. Only one year later their latest release, Lost In Forever (2016) stormed the charts again and a top 5 ranking catapulted the band even further forward! We can’t wait for their promising new release Heart Of The Hurricane!

BEYOND THE BLACK is pure symphonic metal full of energy, straightforward and without any compromises! Their engines are hot and roaring straight into the Heart Of The Hurricane. The title of the third album is not just a catchy phrase, it’s a promise. It’s the result of two years of hard work skyrocketing the band to the next level.

Pre-order Heart Of The Hurricane HERE!

The new single “Million Lightyears” as well as the first two singles “Heart Of The Hurricane“and “My God Is Dead“ are unlocked as instant grat tracks.

You will receive an instant download of the single when pre-ordering the album! Don’t miss out!

Heart Of The Hurricane will be available in the following formats HERE:

Check out the official lyric video for the first single “Heart Of The Hurricane“ HERE!

Check out the second single “My God Is Dead“ HERE!

BEYOND THE BLACK have already played countless shows in Germany and the near foreign countries, with the British heavy metal legend SAXON, one of Germany’s most successful bands POWERWOLF and the Dutch symphonic metal masters EPICA. They also appeared as support for the SCORPIONS 50th anniversary tour! They have also appeared at festivals including Wacken Open Air, Summer Breeze or the Wave-Gothic-Meeting.

BEYOND THE BLACK online: