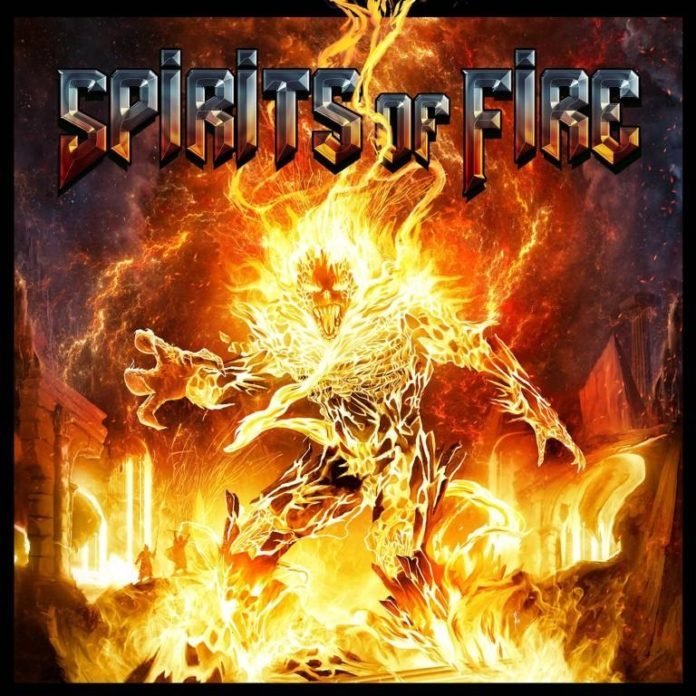 Called SPIRITS OF FIRE (after the title of one of their songs), the band has completed work on their debut album which is set for release on February 22nd via Frontiers Music Srl.  The music can best be described as “classic Priest meets Savatage”.

Pre-order “SPIRITS OF FIRE” on CD/LP/Digital and stream the singles here: http://radi.al/SpiritsofFire

North American fans can get LIMITED EDITION, exclusive red color vinyl & collector’s box (feat. CD + T-Shirt – Size L ONLY) HERE: https://frontiersrecords.pmstores.co/ These are very limited and this is the only retailer in North America carrying these items.

European fan can get the same items HERE: https://bit.ly/2RXvA0Q

Guitarist Chris Caffery on his influences for the record and working with Roy Z:

“My influences for writing on this record were the bands that we were and are still in! I wanted to write songs that [Judas] Priest, Savatage, Testament, and Fates Warning fans would like. But, I wanted them to have a personality of their own as well. To give it a vibe that was SPIRITS OF FIRE! I grew up listening to Judas Priest and spent 30 plus years working with Jon Oliva and Paul O’Neill with Savatage and TSO. Many years playing Criss’ music. These influences for me came naturally! Especially because I’m a fan of all of our bands!

This was the first time that I ever worked with Roy and it was so much fun. I have been a huge fan of his work for a long time. He’s written music, played on, and produced some of my favorite metal albums ever. He had a difficult job bringing this all together and I can’t think of anyone that would have been a better producer and co-worker for this album!”

“I always just sing to the song, whatever I feel it should be.  It’s like a character thing! I like layers! This music is really perfect for me and in my natural wheel house. I like to sing all over the place and change it up and this all happens on this album. This is just the start of an amazing band, I mean sky is the limit and I actually can’t wait to record the next album, because this one is so great and perfect,” says vocalist Tim “Ripper” Owens.

Drummer Mark Zonder adds about his playing and writing process, “I am the kind of player that plays what I think fits best with the music. With SPIRITS OF FIRE, the music was more aggressive and hard hitting which I really liked.  Again, I tried to be very mindful of the song and the vocals, but tried to add parts that were interesting and creative for the listener.”

Originally founded in Naples, Italy in 1996 by Serafino Perugino as a distribution company, Frontiers has developed into one of the premiere independent rock labels in the world. Synonymous with quality music across a broad spectrum, the company has worked with genre heavyweights such as DEF LEPPARD, WHITESNAKE, JOURNEY, YES, ELECTRIC LIGHT ORCHESTRA, RICK SPRINGFIELD, STRYPER,

WINGER, MR. BIG, NIGHT RANGER and more. Aside from providing a home for classic artists, Frontiers also boasts a wealth of young, upcoming talent that, coupled with a savvy and forward-thinking A&R and marketing approach, will be developed into the future of rock ‘n roll. With millions of records sold and multiple Top 10 album chart entries around the world, the label has also expanded with offices in the USA (Nashville) and UK (London). With a deep commitment to and passion for music and the artists who create it and with massive global distribution, sales and marketing channels, Frontiers is the premiere home for both established and emerging rock acts.

Subscribe to be alerted when we add new videos
radi.al/SubscribeFrontiers

Follow the ‘Newest From Frontiers’ playlist on Spotify
spoti.fi/1rQz5Zm